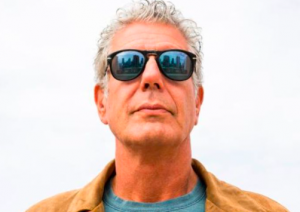 How are you finding the Sydney Writer’s Festival?

I love it here. I’m happy for any opportunity to be here, and to talk about myself and my book.

You mention in A Cook’s Tour that there are certain nations, Australia among them, who are more food obsessed than others. Do you find that your audiences differ in the way they approach your book, which defies genre, depending on where they are located?

No in fact I’m just completely surprised that anyone other than cooks are reading my books. I’ve spent most of my waking hours in an airless kitchen in NY, so the general public reaction has been very surprising to me. The reaction from restaurant critics has been pretty much the same regardless of where they are. What I’ve been particularly surprised by is the business community – they want to use my books as a management tool. I’ve been approached to do public speaking engagements on things like crisis management, team building, etc. If they cancel my TV show, and I can’t write anymore books it will be my fallback position. If Kissenger can do it I sure can. I’ve been very pleasantly surprised that people who haven’t been in the restaurant business get my books, and are interested. If I imagine a reader its a beleaguered overworked line cook. That what I originally had in mind. Most of the people who attend my readings fit that category.

There was a certain degree of ambivalence in A Cook’s Tour towards the mindlessness of the media and the whole publicity trail with Kitchen Confidential. Are you finding the same thing with A Cook’s Tour?

I feel a little guilty about some of those comments. This doesn’t feel like work to me, at least not compared to standing in front of a stove 14 hours a day. Talking about myself is pretty easy. I can’t believe I’m getting away with this. It’s not that difficult. The only thing, and I hate to complain to journalists about something as easy as talking about myelf, is doing a 32 city tour in the US, and having a 2 minute segment with some haircut that hasn’t read a word breathing down a sheet of paper. I’m a little embarrassed that I created a monster like the “fish on Monday” thing, but otherwise I really can’t complain.

In the beginning of A Cook’s Tour you postulate that perfection is about context and memory. Did you still believe that by the end of the tour?

More so than ever. I love Vietnamese food but it is so much better looking out the window at Vietnam. It brings a whole new dimension just by virtue of being there. The tour made me understand travelling the world and eating in different circumstances, as well as the importance of great chefs like Thomas Keller. He is a really good example of one of those elements – a deep understanding and appreciation of human nature and a great sensitivity. Eating in rural Vietnam and Mexico helped me understand the roots of the greatness of French and Italian cooking. I now understand why the French cook so seasonally, and use every part of what they cook with. They had to.

Another interesting thing that came through in A Cook’s Tour was your sense of disappointment. This was strongest in France, but a kind of undercurrent through many of the places you visit. Why do you think that was? (It that because you can’t manufacture context and memory?)

I tried to force it a lot. I set out with very romantic expectations, and was misinformed with expectations that were, many times, moulded by Hollywood movies and novels. I was particularly disappointed in France because I thought I could rebuild memory and context like a Frankenstein monster. I couldn’t do that. Also, the passage of time often improves meals. The perfect meal may be something that exists only in the past.

And yet, despite what you mention at the start of the book, about perfection not being about expense, some of your most ‘perfect’ meals – The French Laundry, St John, Edomae Sushi…are actually quite expensive and exclusive, and very finely crafted.

Yeah – I think that Keller talks a lot about perfection being unattainable. One never reaches the end of the road – as soon as you get close its gone. The French laundry is as close to perfection as anyone can get in a restaurant setting. I think it would be silly to pretend that I’m not still looking for the perfect meal. I yearn for it.

Vietnam is the antidote of course. There is great food in other places though – what is about Vietnam that really caused you to fall in love with it?

Vietnam is consistently guaranteed to provide a good experience. I think I was predisposed to love it. It lived up to and exceeded all my foolhearty expectations. There is a fierce Nationalism. You find fierce national pride, and lots of good cooks. People are so visibly joyful about food and passionate about eating. You know there is a pheromonic reaction when lovers meet – they just smell right to one another. Vietnam smelled and felt right to me – the colours, smells, tastes – all my senses were involved. It was everything I had imagined – the Vietam of the The Quiet American in Graham Greene – that was there. The Vietnam of Apocalypse Now – that was there too. Great food was there. There was the hint of France, but also the element of the exotic. I was completely enchanted.

I found the “Burn” moment (when you saw the burnt beggar in the street) to be particularly powerful (and many readers can probably relate to that sudden sense of guilt and futility). You went on with the series though. Does it still haunt you?

It’s funny though because I brought this up with my hosts who were former Vietcong, and they said “get over it – we liked you when we were shooting at you. We saw you as loud blundering goofy invaders who liked dogs too much, but also liked children. You were stupid enough to invade, but don’t flatter yourself.” Vietnam has been under siege for years. As far their oppressors go – they loathe the Chinese; they hate the Cambodians, they despise the Russians. This helped a lot – to be received by the Vietnamese with unrestrained generosity – open hearted, generous, proud, telling me that my sense of guilt was my problem, and that I should get over it and dig in – “we have good food here”. They were delighted that I was there, and proud and happy to show me the good things in that country. So I felt that in some ways I was maybe just being a neurotic New Yorker.

Your writing style is very personal, and very honest. Do you find that this kind of honesty makes strangers treat you as if you were an old friend?

Cooks of course – I hear this a lot: “dude I read the book – I know what you mean man”. I like that though. I don’t feel like its invading my space. There is a subculture of cooks, and I’m reaffirmed by this.

Do you feel that people make the mistake of taking your literary personae as the real Anthony Bourdain?

I don’t feel any pressure to wear a black leather jacket and talk dirty, no. I know who the real Anthony Bourdain is.

What about The Food Channel – were the good ratings enough to overcome the serious ribbing you give them in the book?

I will continue to be harsh with them, and I’ll milk it for all it’s worth. I’m in no hurry to do another 22 episode season, but I was reasonably proud of the show. I want to be able to look at myself in the mirror. If I have a philosophy, it is to wake up in the morning feeling comfortable with what I’ve done that day. Being a heroin addict was very good training for being a celebrity chef. If ever I start to feel like I’m not living up to expectations, or maybe selling out, I think that whatever I do, it is better, and a long way from, stealing money from my mother.

Are you still employed by Les Halles?

Yes in some sort of nebulous adviser capacity.

What’s next? Are you really planning to write a field manual for the kitchen?

Yes, I’m working with the chefs who will put together the recipes while I write rude and abrasive commentary. I’ve only written 2 sentences so far. But it is certainly in the works.

Will you write more about Vietnam?

Yes I will. Honestly I know a little more about the country than I let on in the book. My ambition is to take my wife there, and live in a small cottage and just see what happens. I’m not going to go with a plan to write fiction or non-fiction. I’ll just let the country speak to me for a while and then do what comes naturally.

What about fiction? Do you think you’ll ever write a mystery again?

I have one coming out in the UK shortly. It is called Bobby Gold. It is a very slim book about a reluctant bone breaker inforcer in a midtown Manhatten nightclub who falls in love

← Interview with Chad Hautmann, author of Billie’s Ghost
A Review of The Empty Cafe by Michael Hoffman →