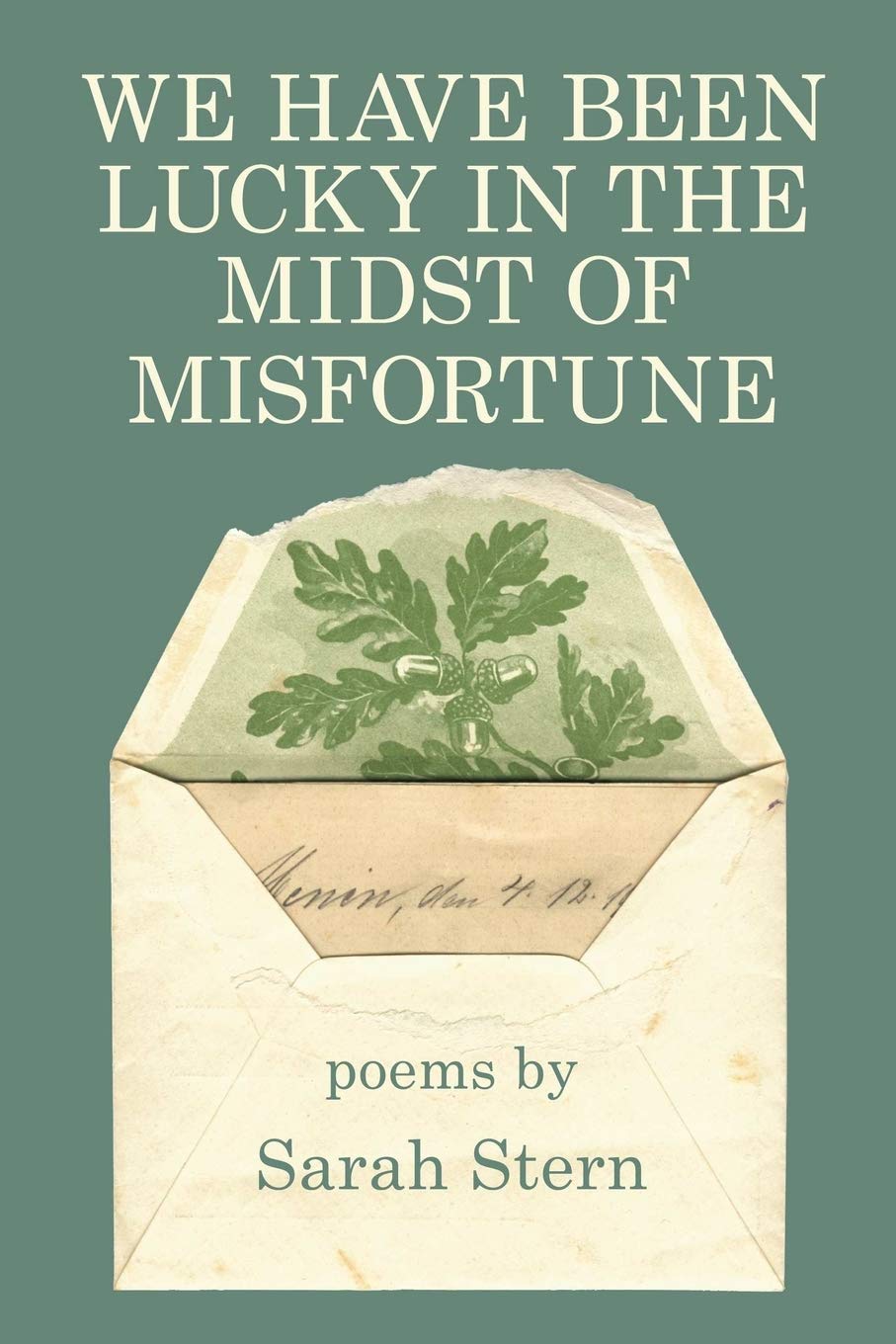 One way we address a great grief is to embrace the “before it” and the “after it,” taking care to only lightly palpate the wound itself. This is the technique Sarah Stern uses in the title sequence of her book We Have Been Lucky in the Midst of Misfortune, an exploration of what it means to be a German Jew before WWII or the descendant of German Jews. There are 11 poems in this sequence—some prose poems, some “found” bits, some free verse. Through an old family photo, we meet the dramatis personae, which includes the narrator’s grandfather and his nine siblings. This count excludes two sibs that died in infancy and one that ran off with a Gentile. The narrator, in Germany with present-day hosts, sits at table in Horb am Neckar outside the Black Forest watching the swans. She has, as we see from the next two poems, translations of letters her grandfather, Corporal Julius Pressburger, wrote to the mayor of what was then an independent community, Rexingen, now part of the municipality of Horb. Don’t let these details slip by you. The ways that time and war shape language and geography run parallel to the way that the human soul transmigrates; and they shape the identity of the beings that are geboren and gestorben (38) there.

Before the war there was a cafe in Horb,
Down the hill from Rexingen.
You could sit and talk there. (“Cafe Levi”, 52)

Like so many German Jews, Corporal Pressburger was decorated in World War I but arrested on the verge of World War II. Like my neighbor’s grandfather, he did a stint in Dachau back when it really was “just” a work camp. He immigrated to the USA after his release. His brother Isaak, we already know, “didn’t make it out.” (37) Yet there is healing—it is delayed, distant, and translated—but it is healing nonetheless:

Yes, we did, late night
the Christmas markets not far
Einstein Kaffee near. (“Making Love in Berlin”, 54)

Another notable sequence in this book is “The Little Room.” In these six poems, Stern’s narrator invites us into therapy with an analysand who, it is revealed early on, truly has some issues to address. In the first poem of the sequence, “Where the Stories Begin,” the patient introduces us to the analyst:

You wear thin ties, gray pants
and listen like no one has ever listened. (93)

And then she confesses:

In “The Clearing,” the patient identifies the analyst with Mister Rogers (“I wanted Mister Rogers to be my father”) (94), which is as disquieting in its own way as was her love at first sight. From love to daughterhood…but wait! By the next poem, “Album,” things get even more unheimlich:

Two inches from my face
That space between us softens.
You move back in your chair.
The session begins. (95)

This could be the famous B&W of Marie Bonaparte photographing Freud. In “The Stutter,” our patient waxes mystical over the connections between the analyst’s stutter and her own “new teeth pushing through the gum,” the words they share with one another. (96) There is of course, only one way for this to end, with the patient’s disillusionment. In “Around Town,” the patient catches sight of the analyst in “a cafe with another woman” (97) and the spell is broken. She is betrayed:

In “The Fight,” she ends it, she leaves “before the session is over,” going where “the cool air feels good” on her face. (98) But she has also abandoned the pressing issues she set out initially to address. This patient wants vengeance, tepid though it may be:

I hope you stay
in the little room
until my hour is over. (98)

Though I have focused on just two sequences, this collection is replete with haunting and thought-provoking poetry.

Sarah Stern is the author of But Today is Different (2014) and Another Word for Love, a chapbook, 2011) from which her poem “The Owl” was featured on Verse Daily. She has been awarded the Bronx Council on the Arts’ BRIO (Bronx Rewards Its Own) Award for Poetry—a monetary award of several thousand dollars—five times.

About the reviewer: Judy Swann is a poet and essayist who publishes fairly frequently, both in print and online. Her book of poetry, Fool (Kelsay Books) was released in December, 2018. Her book of essays on the cartoon superhero Stickman (John Young) will appear in March, 2019.

← An interview with Andrew R Williams
A review of Above an Abyss: Two Novellas by Ryan Masters →