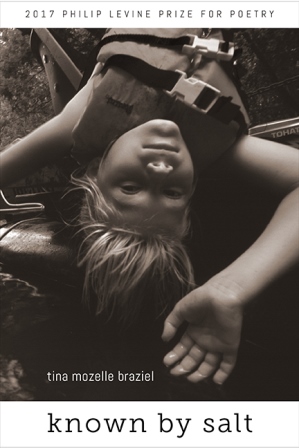 With a grace that honors her roots, yet soars beyond, Tina Mozelle Braziel has written a singularly beautiful, intelligent, and accessible collection of poems in Known by Salt (Anhinga Press 2019). It’s no wonder she won the prestigious 2017 Philip Levine Prize for Poetry for the collection.

The poems are rich with images that speak of her native South—“the bottom where I once grew collards,” “glasses of tea sweat on the blue Formica,” “black-eyed peas and okra,” and “the clothes line between hickory and house.” While many poets use everyday images, hers resonate with a wholesome crispness that refreshes, like the simplicity of William Carlos Williams’ “plums that were in the ice box.” Yet Braziel’s images—like Williams’—speak volumes about human experience and evoke themes of loss, growth, bravery, and transcendence.

Braziel’s poems excel with their vivid images, but the language also shines with powerful verbs utilized in a manner which creates something unique out of the ordinary. For example, Braziel’s “cornbread exhales its golden brown,” her “wheels bloomed with rust,” and the scent of money is “musk muddled by thousands of hands.”

In “Housekeeping, a poem reminiscent in tone and sheer beauty to James Wright’s “Lying in a Hammock at William Duffy’s Farm in Pine Island, Minnesota,” Braziel writes gloriously:

Each morning, a hummingbird
whirrs to the window to watch
the glass bloom with its likeness.
And I recognize the house is not kept
by sweeping straw across floor-planks
and rubbing rags over shelves.
I’d do better to lie in the hammock all day,
lifting a finger to the breeze
sieved through screen,
listening to the cat purr as he strolls
from corner to corner, smudging
the house with his thrum.

With a narrative flow from poem to poem, Braziel tells a story about transcending limits in which the poet goes from being a child trapped in a trailer park to a young woman building her own home. Initially, in “Beneath the Trailer,” the poet, “wearing only Underoos/and clutching a near-empty bag of Wonder Bread,” is thwarted by the underpinning of a house trailer which

… kept me out and was meant to
keep me from dreaming my way west,
from circling the trailers each night.

From this trapped child, with the “trailer park chip on my shoulder” referenced in “Trash,” the poet in “All Our Things are Resurrections,” writes of reclaiming “retired telephone poles,” “old church glass,” and “tongue and groove heart-pine ceiling” in building a new home with her husband. She concludes:

All our things are everyday
calling for me to wake
like water roused to wine,
like sand rousted into glass.

Yet as moving as the home building poems are, perhaps the most powerful and poignant poem in the collection is “Tornado Sermon.” Given that Braziel grew up in Dixie Alley, an area of the Deep South prone to violent tornadoes, she probably experienced first-hand the terror of a tornado. If not, she certainly writes with a precision that speaks of a personal acquaintance with the destruction.

For three days now we have cleared rubble,
boarded windows, carried each other so no one sits
like Job in the ashes of what was.

We’ve searched fallen oak and briers
for chickens, littered fields for photographs.
We’ve seen ourselves in that mirror.
Now we’ve got to search ourselves
like we searched broken planks
and fallen chimneys for moan and movement
for someone we might save.

Braziel’s lyrical, captivating voice will no doubt only get richer and stronger as she continues to write. Yet, the young voice she has now is so fine, lovely, true, and strong. Readers can only begin to imagine what might come next from this rising star of modern poetry.

Reprinted with permission from the Alabama Writers Forum’s website.

About the reviewer: Claire Hamner Matturro is an honors graduate of The University of Alabama Law School, where she became the first female partner in a prestigious Sarasota, Florida law firm. After a decade of lawyering, Claire taught at Florida State University College of Law and spent one long, cold winter as a visiting legal writing professor at the University of Oregon. Her books are: Skinny-Dipping (2004), Wildcat Wine (2005), Bone Valley (2006) and Sweetheart Deal (2007), all published by William Morrow, and Trouble in Tallahassee (2018 KaliOka Press). Coming in Spring of 2019: Privilege (Moonshine Cove), a steamy legal thriller noir set on the Gulf coast of Florida. Follow here at http://www.clairematturro.com.