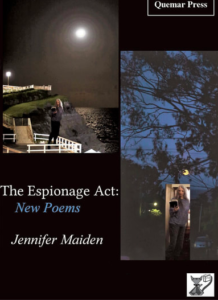 Jennifer Maiden’s work has always been politically engaged. Genre-defying, whimsical and irreverent, she’s not afraid to revive historical characters and pair them with current political, literary, artistic and fictional people in order to allow for perspectives and analyses that are far reaching and deep. Her extensive reading and astute observations are obvious in her latest book of poetry, The Espionage Act, which is full of political, artistic, and literary awakenings. The work covers so much ground, and yet is also poetic, pointed, condensed, and focused. As the title suggests, The Espionage Act explores a wide range of subjects about and around espionage, including the use of The Espionage Act which was used to imprison Assange, and about morality in general.

Many of the poems in this collection are longer works, which allows for a kind of hybrid approach that moves between poetry, prose, history, essay, and even play styled dialogue. Maiden opens with Gore Vidal, who wakes in London Magistrate’s Court next to Julian Assange, who is reading Gore Vidal’s History of the National Security State (a book that the real Assange was holding when he was arrested). It is a strange, slightly recursive relationship between the two, and Vidal’s care of his reader continues throughout the book. Vidal, a ghost who sometimes talks to Assange and sometimes just watches over him, as able to look closely at Assange who functions here as an increasingly frail victim. Vidal cannot help Assange, but he is able to provide comfort, and to engage the reader in this act of nurturing:

The cell had shining floor and dark cream cupboard,
ceiling light a high fluro strip. He cupboarded his book
about power of presidents: no locks. In his sleep, again,
Assange’s face regained fugitive trust. Vidal tugged up
the grey thin blanket resignedly on him. (“Gore Vidal Woke Up in Belmarsh Prison”)

Vidal and Assange form the central core of this book and there are a number of poems that continue to return to them. Vidal remains with Assange in Belmarsh Prison Hospital where he reads to him from his book, greets other ghosts like Anarchist Emma Goldman, who was also sentenced under The Espionage Act, and Princess Diana, who, in another act of espionage – from the dead to the living, divulges gossip about Trump from heaven (or “Theme Park Nirvana” as Maiden puts it):

Is the gossip just that Trump was able to fire
Bolton because the wife of Adelson, his financier
was having a fight with Mrs. Netanyahu, and therefore
no need now to confront Iran and to elect the man by war?’
She nodded, clasped her ascendant knee in laughter. (“The word on the street”)

Invariably, the average reader will be less knowledgeable about history and politics than Maiden, and may miss or have to look up some of the references. Spending a bit of time filling in the gaps is actually a good thing, and it’s quite possible to go down a pleasurable rabbit hole working between the poetry and Google.  There is much to be learned here about Deep State, the US 1917 Espionage Act, WikiLeaks and the Vault 7 cache, Gore Vidal, the way in which the CIA (as a backer for the Congress for Cultural Freedom) used American modern art as a weapon in the Cold War, the tricks of the British MI6, the dismissal of Gough Whitlam, the use of the Turing Test during the 1950s, fake news, and the Australian Poetry Wars, to name a few of the areas that this book tackles.  This is a very wide reaching book that explores the abuses of power, media spin, and the way governments manipulate and impact on what the public is allowed to know, though throughout the poetry is always rich, self-sustaining, and powerful:

If they all write in the interest
of combating the internet’s dissident power that is based
as I’ve often said, on its binary rhythms as mnemonic
as poetry, as intestinal, metrical, universal, catalytic
as the memory of the minstrel, on the natural heartspace,
invincible electricity that calls us back to earth, one should s
till respect their panic at the beat of their own blood. (“Diary Poem: Uses of Alan Turing”)

This is work that not only provides a different kind of news, engaging with issues like free speech, democracy, aesthetics and ethics, a continual source of interest for Maiden and one she explores with the full weight of her poetic talent, but also allows the reader to see things from a different, and at times, magic realism perspective. Jackson Pollack and Brett Whiteley talk aesthetics and art’s uses in propaganda, the Australian Labor party dallies with the British Secret Service, Dorothy Wordsworth talks to ‘the Australian critic’ about poetry, Gabriel García Márquez talks to an American critic recommended by Borges, and the Federal Police raids the ABC:

except that the rhythm of a beat and a space was there,
except it mirrored the quick coolness of a beating, except it is such great violence nothing comprehends it,
except the exceptional powers, whose up and down Except
is escaping through the flat white air. (“Except”)

Throughout the book, Maiden explores her own processes with the diary poem, a self-reflective exploration of the themes, difficulties and structures which breaks the third wall and presents a post-modern take that also contextualises and references other poems:

If the poem for the anthology had less trimness,
it might have looked like this, the sea’s corruptness
glory’s chaotic, deliberately rich tidewrack –
shored in jaggy lacy music: but here with you. Yes.
You and I can be reminded now of that. (“Diary Poem: Uses of Corruption”)

As with all of Maiden’s work, there is a consistent thread that connects this to her other books. Her Play with Knives characters George Jeffreys and Claire Collins are ever-present, dreaming, having dinner at the White House, raising their son Corbyn, and exploring morality and trauma, almost as an ongoing conversation. There is also Brookings, the marsupial or “Pombat – cross between a possum and a wombat”, from Maiden’s previous poetry collection Brookings, the Noun, who enjoys having War and Peace read to him while wearing his little white helmet. Funny, pithy, frightening, smart, and politically astute, Maiden’s latest book The Espionage Act is both timely and timeless and is a delight to read and explore.

← A review of Billie Eilish’s When We All Fall Asleep, Where Do We Go?
An interview with James A. Cox, Midwest Book Review →