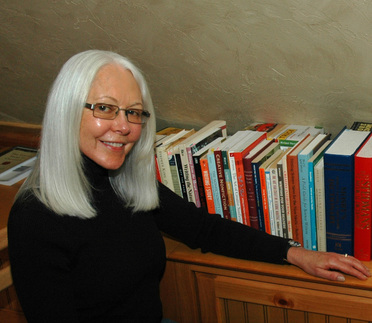 Nan Sanders Pokerwinski was a science writer at the Detroit Free Press for more than a decade, worked as a science writer for the University of Michigan News Service for fourteen years. She’s been a contributing editor to Health and Alternative Medicine magazines and has written for More, Fitness, Dallas Morning News, and other print and online publications. Her journalistic byline is Nancy Ross-Flanigan and she’s received a Pulitzer nomination, several awards.

What awards has Mango Rash won so far? How did you come to write it and how long did it take?

Mango Rash won first place in the memoir/nonfiction category of the 2018 Pacific Northwest Writers Association Literary Awards and was a finalist for the Northern Colorado Writers Top of the Mountain Book Award, the Tucson Festival of Books Literary Awards (twice), and the 43rd New Millennium Writings Literary Awards.

I started writing about my Samoa experiences (which form the basis of Mango Rash) when I joined my first writers’ group in 2004. I’d always struggled to convey to anyone who wasn’t there at the time what it was like living on a tropical island as a teenager in the 1960s. I began writing my Samoa stories as a way to explain not only what the experience was like, but also why it made such an impression on me—something I’m not sure even I fully understood until I started writing about it.

I finished a first draft of the manuscript within two years but had to set it aside for a number of years, due to my workload and other circumstances. I kept submitting individual chapters to my writers’ groups and to writing workshops, however, and filing away all the feedback. Eventually I was able to make time for more concentrated work on the manuscript as a whole, and I spent a year or two revising it, drawing on all that feedback I’d stockpiled. So I guess you could say it took 15 years from start to finish, but it was really only three or four years of active work.

How do you manage to write on such a wide range of subjects and styles? In what genre did you begin?

I write about whatever interests me, and I’m curious about a lot of things. I also try to write about things other people are curious about, which opens up a world of topics. I began in nonfiction, as a journalist, and most of what I write is nonfiction.

Writing in different styles is something that developed over time. When I decided to write my memoir, I wanted to get away from a journalistic, magazine-y style and adopt a more lyrical, literary nonfiction style. It took a lot of study, practice, and trial and error to begin to write differently.

I’ve had no formal literary education beyond high school and one or two college classes. I’ve learned as I’ve gone along, from reading and from writing workshops. I missed a lot of classic literature on the way up, and I’ve enjoyed catching up (as well as discovering emerging authors) in mid-to late-adulthood.

I was surprised about you selecting potholes as a writing topic—how did that come about?

During my years as science writer for the Detroit Free Press, I specialized in looking at everyday experiences with a scientific slant. One winter I heard so many people complaining about potholes I decided to find out what scientists and engineers were doing to address the problem. I never expected to win an award for that story, but apparently the National Society of Professional Engineers thought it was prize-worthy.

Do you see a connection between your photography and writing?

What an interesting question! I’m not sure there’s a connection, but the two activities are complementary. When I take photographs, I shift from thinking in words to thinking in images, and that shift gives the verbal part of my brain a rest, which stimulates my creativity and gives me fresh perspectives when I return to writing. Likewise, when I’ve been working with words for a long time without doing any photography, I find that I’m much more receptive to imagery the next time I go out to shoot.

How has living in Michigan influenced your writing and outside interests?

I’ve met and learned from so many gifted writers here in Michigan, and I’ve found very supportive writing communities in every part of the state where I’ve lived and worked: Detroit, Ann Arbor, and now West Michigan. It was here in Michigan—at the Bear River Writers Conference, to be specific—that I first felt I’d found my tribe of kindred writers. As for outside interests, I’ve always been drawn to nature and the outdoors, and living in Michigan—especially West Michigan—I have ample opportunity to indulge those interests through hiking, kayaking, photography, and just living in the woods.

Right now, mainly promoting Mango Rash and keeping my blog, HeartWood (www.nanpokerwinski.com/blog) and newsletter, “Mango Meanderings,” active. But I have several projects on the back burner that I hope to get back to work on soon: a novel about outsider art, creativity, and madness; a childhood memoir with themes of individuality, inclusion, and exclusion; a multi-media project that combines autobiographical collages with micro-memoirs; and a children’s book that I’m collaborating on with my husband Ray Pokerwinski.

For more information about this diverse writer visit: http://www.nanpokerwinski.com/about.html

About the interviewer: Carol Smallwood, Marquis Lifetime Achievement Award recipient, is a literary reader, judge, and interviewer. Her most recent collection is Chronicles in Passing.