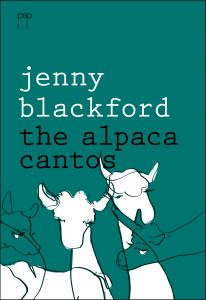 Jenny Blackford’s poetry is instantly engaging and beautifully grounded. She moves in close to her subjects and with wry and often whimsically humour, providing deep insight. Blackford’s keen eye reminds us to pay attention, look closely and to open our perspective; to see things with an animal cunning. As with Blackford’s other books, there are cats, but also (naturally) singing Alpacas, Llamas, a Tawny Frogmouth, dingo puppy, giant snails, finches (Meeps), Miner birds, and rats, and many other animals. The animals pepper the work in entirely natural ways, blurring the lines between home and the wild world, as in the opening poem “black ice night, frogmouth”, where, cat-flanked, we are suddenly eye to eye with the bird:

Blackford’s animals are always at the same level as the human, as with a domestic pup/dingo:

like radar ditches poised
to listen to the universe unfolding. (“Not just a river in Egypt”)

The Alpaca Cantos is divided into five parts. The first, “Stranger Homes and Gardens”, is the funniest, moving between the house and the garden, along with assorted animal visitors, pets, dead animal offerings, and of course cats, shameful, clever, playful, mysterious, and even godly, like the “Great Felinity”, tangling “quantum string//round softly-hissing black hole balls/deep in the centre of the multiverse.”

As the name might suggest, “The Alpaca Cantos” section is something of a travelogue, with cruises and bus trips from Patagonia and Santiago to Westminster in London. There are multiple poems with Llamas, Guanaco and Alpacas of course, as well as a snatch and grab story that beautifully marries action with reflection (and what a phrase “blur dopplering” is!):

It may be my own penchant for sadness, but to my mind the “Lamentations” section is the most powerful in the book, exploring illness, aging, and loss with delicate devotion. As with many of the poems in The Alpaca Cantos, “Going Home” provides a beautiful nexus between the overall plot of the piece – a mother’s Dementia—and the domestic details of the everyday:

In her small garden of delights
new-minted every moment. ‘Look at those limes!’
And what are the lovely flowers there?
The white ones? The star magnolias
that she planted. Each leaf and fruit
and flower new again and again

This is a particular skill of Blackford–the way she unites tragedy and comedy; the sorrowful end of life and an exuberant beginning. There is a similar set of dichotomies in “Snow”, where a wife visits her husband who is in the late stages of Parkinson’s. The fluffy youth of the puppy, with its freedom of motion and softness an antidote to the rigidity:

She’s brought a dandelion puff of a puppy
to sit with him, for when the stop-
start muscles freeze into place. Yuki’s tail
curls like the crescent moon.

Other sections include “Love is a Battlefield” which provides a series of pieces that are mostly whimsical, exploring the nature of love and its changeable guises. Blackford’s Sci-Fi leanings and Classicist training is evident in this section, which play with fairy tales like Beauty and the Beast, or imagines a Frankenstein’s couplet of self-created lovers,  or reanimates the Ereshkigal and Ishtar, the Mesopotamian Queen of the Dead who rules the underworld, and graces a plaque in the British museum:

Ereshkigal still rules the night
her ancient power tugs
our bodies’ hidden string. (“Houses of the living, houses of the dead”)

The final chapter, “Time and Space”,  explores ageing, memory and love through a somewhat e against timeless tropes like love and memory as well as our follies. Like Proust’s Madeleines, a Red Velvet cabbage conjures up a youthful kiss:

My tongue tastes tender scarlet crumbs exploding
from red velvet cake, three years ago and
half the world away; and, distant as the dinosaurs
the man across the table, his clever mouth on mine. (“Red velvet cabbages”)

Even at its most intense, Blackford’s poetry never stops being warm, accessible and humorous. The Alpaca Cantos is beautifully presented with thick paper, careful layouts, with lovely drawings by artist Gwynneth Jones. These are poems that are both complex and simple, tragic and yet infused with delight and an almost impish joy in the day-to-day.

← A review of Flourish by Dora Malech
New Giveaway! →