Multi-talented lecturer, former dancer, director and filmmaker Karen Pearlman has created a beautiful trio of multi-award-winning short films built around female Soviet filmmakers/film editors. Elizaveta Svilova and Esfir Shub had long and productive careers under difficult conditions during Stalinist Russia in the 1920s and 30s, often doing editing work from their kitchens, with limited equipment, under an oppressive government that tried to stifle them. The three films are able to be viewed individually, but taken together, they form a cohesive story of just over 30 mins long. Collectively, the films present a compelling story of quiet tenacity, talent, and artistic determination. The films are all exquisite, featuring a distinctive blend of narration by Pearlman overlaying an Expressionist montage of documentary images, storytelling, and visual imagery to create seamless shifts between past and present, inner life and outer, and the creative process versus the finished film. A similar style of music, written by Caitlin Yeo, links the films, combining haunting violin and cello with the occasional Klezmer-like explosion of sound. 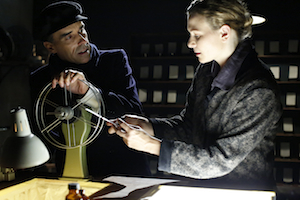 The title of the first film in the series, “Woman with an Editing Bench” (2016), is a play on director Dziga Vertov’s film “Man with a Movie Camera”, and focuses on Vertov’s wife Elizaveta Svilova, whose editing of Vertov’s famous film was pivotal to the film’s success. Her role in Vertov’s work is explored here, but also the nature of creativity, inspiration, oppression and perseverance. The creative relationship between Svilova and Vertov is a story of its own, subtly and powerfully depicted through facial expressions and body language. What really stands out though is the cinematography, which mirrors Svilova’s innovative editing techniques, applying subjective and often abstract visualisations, repetition, and surreal sequences such as synopses papers flying out of the window, Vertov falling, film reels unspooling, Svilova and Vertov dancing amidst a shower of flour, or Svilova holding Vertov in her arms. These sequences presented from Svilova’s point of view gives the film a poetic quality. “Woman with an Editing Bench” is available for viewing on Vimeo: https://vimeo.com/ondemand/womanwithaneditingbench

“After the Facts” is the shortest of the trio at only five minutes. The film is, in some ways, a commentary on the other two—exploring the importance of editing, not just in film but in how it can impact the way we perceive reality. The film demonstrates its thesis artistically: the camera panning from a woman looking to what she sees, and finally, to what she thinks.  This is done by utilising Esfir Schub’s archive of “facts” to create a “remix” that that moves between historical image, modern story, and an engaging lecture on the power and importance of editing.  The film is available for viewing at the Women Pioneers Project: https://wfpp.columbia.edu/2020/03/16/after-the-facts/

The third film, “I want to make a film about women”, is an ambitious conclusion to the series, combining dance, abstract imagery, graphics, film montage, and music. The film is built around the work of Esfir Shub and extends the thesis from the other films about the importance of her editing work, and of the very different way that these women worked: hands-on, collaborative, and embodied through motion, touch and sound. This is a sharp contrast to the way we have been taught to think of the individual genius of giants like Eisenstein, who, along with Vertov, makes a humorous guest appearance in Shub’s creative kitchen where Shub ended up instructing them. Pearlman uses animations to explore the impact of labels, suppression and subversion. The visuals in this film are particularly powerful with brightly dressed dancers, moving in abstract ways against the shadows they make on the wall of the studio kitchen. The film finishes with a montage of Shub’s film work, presented as the best (and only) way of knowing her, and in doing so, of knowing ourselves.  The film continues to screen around the country at major film festivals. The trailer can be viewed here: https://vimeo.com/370015980

“I want to make a film about women” is a Finalist for CinefestOz’s inaugural Best Short Film Prize: https://tix.cinefestoz.com/Events/I-Want-to-Make-a-Film-About-Women.  It will screen at Margaret River HEART in Western Australia, at the CinefestOz Short Film Awards, at 1pm on Saturday August 29, 2020, an edited version of which will be available for viewing online for 24 hours from later in that evening.  Tickets: https://cinefestoz.com/browse-sessions-tickets/ticket-info-faqs/

Karen Pearlman’s trio of films rediscovering the work of Soviet women filmmakers are a joy to watch. Each of them is evocative and taut—illuminating and imagining the lives of the amazing women who have had such a (relatively unknown) impact on film, but also providing insight into the creative process and into the critical importance of women’s work through the Stalin era and beyond.