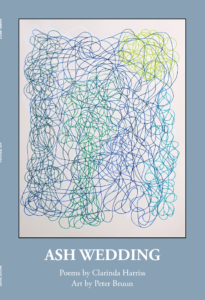 Just as her previous collaboration with Peter Bruun, Innumerable Moons, deals with love, loss and grief in later life, so too does Clarinda Harriss’ new collection.  Ash Wedding amounts to an extended elegy for Harriss’ friend, Steve Davitt, whom she’d known for more than three decades and with whom she spent the final two years of his life. Davitt suffered a massive heart attack while walking their dog on the streets of Baltimore in April of that already devastating year, 2020. The dominant theme in these poems is grief, raw, unassuageable grief.

The first poem, “April 8, 9, 10: Dear Steve” spells out the fact of her beloved’s death, the day of the funeral, the drive home from the cemetery.

At home: our dog knew your ashes
had sat on my lap. She sniffed, then moved
to your side of the couch to mourn.

Lord, I believe in sorrow and suffering, for they make everyone one.

How much more elemental can you be than by addressing God? As in “Grief Litany 4,” which is addressed to the Lord, God is the implicit or explicit audience of other poems in Ash Wedding. Remember John Lennon’s lyric in his song, “God”? God is a concept by which we measure our pain. In the poem, “Gig,” a friend observes, aiming to provide some comfort, “See, I told you he / rocks this afterlife gig.” Steve had appeared to the friend as a butterfly the day after his death. Harriss writes:

Christ! We grievers attract clichés like
honey. Bitter, black, fermenting honey. You send
us bees to buzz our brains.

“Christ!” may be both an expletive here and the audience to whom she is addressing her words (Is “You” Christ or Steve, after all? A delicious ambiguity.). Earlier in the poem, she comes across a bit of graffiti with a similar platitudinous message: “I am not afraid to walk / alone I will keep on living.”

A casual reader might easily mis-read Ash Wedding as Ash Wednesday, the Christian holy day that marks the beginning of Lent, the period of repentance, an essential attitude of sorrow. As a symbol, ash has long been associated with sorrow, mourning, mortality. Yet even in sorrow, the poet demonstrates a versatility and playfulness with language.

This is also on display in the poem, “Nonsense,” in which Harriss is walking the dog and recalls the childhood rhyme, Mairzy doats and dozy doats and / liddle lamzy divey….” She notes that it is a song their dog likes her to sing when they go for daily walks.

Ever since last Easter, cruelest April, it
has meant We’re walking by the lawn
where we found our best-beloved Man
sprawled dead of a burst heart. Face down
in risen grass.

The Christian overtones of “risen grass,” on Easter Sunday, are plain. Reflecting on the nonsense words, she concludes that the song’s deepest meaning is “Just keep walking. Just keep singing.”

Ash Wedding comes with an epigraph from a sonnet by Sir Thomas Wyatt:

Written after a sonnet by Petrarch, Wyatt’s poem addresses a love that seems as much spiritual as romantic. Indeed, Harriss and Davitt only became involved after they’d both had families, and their age difference almost spans a generation. In the poem, “Frame,” Harriss considers the bathroom window that overlooks the garden and wonders “How often  / did you wonder for just a fleeting moment / What is that old woman doing there.” No matter. Harriss’ own sonnet, “Proposal” spells out her love.

I told Father Boyce I wanted to go Roman
and confessed the calling was my love
for a man who was not Jesus, was not God.
I asked if my motive was impure. He laughed.
You haven’t thought about the millions who
convert in order to get married, isn’t that so?
I’d never looked at it that way, although
the man lies buried beside my own stone
in my family’s plot. Yes, I hope our ghosts
can marry. The reasons our flesh could not
will hardly matter to our ashes. I hope the man
will approve. The dead one, not Father Boyce.
I’ll ask him, though he may not have a choice.

Just as her previous collection of grief-saturated poems, Innumerable Moons, was accompanied by Peter Bruun’s intricate drawings, so Ash Wedding includes five of Bruun’s drawings, including “Grief Like Grapes On A Vine,” which is also the cover art. His complex drawings are, as Harriss writes in “Gig,” “bees to buzz our brains.”

The voice in Ash Wedding is stunningly controlled, even as, in such poems as “Keening in Writing,” the pain is not just so palpable you might flinch; it is indeed measurable: God.

← A review of Avoid the Day: A New Nonfiction in Two Movements by Jay Kirk
A review of Chimera by Jane Skelton →