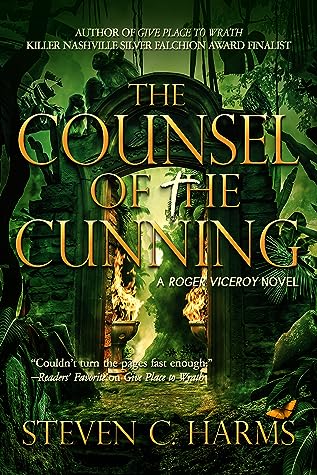 The Counsel of the Cunning
by Steven C. Harms
(a Roger Viceroy Novel)
Suspense Publishing
November 9, 2021

A complex, imaginative novel, The Counsel of the Cunningby Steven C. Harms, offers readers international thriller pacing combined with the precision of a police procedural and just the right gloss of mad scientist. It opens with a howler monkey and a kidnapped scientist, and it never slows down or lets up from there as the characters—good and bad—travel through vast landscapes and much danger. Broad in scope, the story is a bold adventure with harrowing interludes in which the prevailing question seems to be “what exactly is going on here?”

The howler monkey in chapter one sets the stage and gives the story its initial creepy atmospheric quality as readers are introduced to Dr. Catarina Amador, whose promise as a brilliant scientist led to her kidnapping. She is being forced to work in a jungle and is well guarded. What exactly is going on may not yet be clear, but the suspense is evident.

Just as readers are getting intrigued with Catarina, the story flashes to Roger Viceroy, the protagonist of the series, who is an FBI agent. But after setting the hook with Viceroy’s story, the novel just as fast flips to a tricked-out SUV and a drug deal. But what the drug is remains more than a bit of a mystery. Though it’s clear from the chapter that this is no ordinary cocaine deal but something unique.

Viceroy, readers soon learn, is a man with great sorrow in his life and past. He is a star within the FBI when he is invited to join a “stealth investigative agency.” The recruiter notes that Viceroy possesses a “skill set of unquestionable excellence, but also a certain truth that is rare. Loss. It breeds perseverance.” Viceroy’s team, Regina Cortez and Trevor Moreland are also being recruited.

The exchange between Viceroy and his recruiter, who turns out to be Jürgen Sandt, former United States senator and last heir to the once mighty Sandt Brewing Company, lets the readers know Viceroy can operate outside the boundaries of the FBI’s protocols—if he accepts the position. The former senator, whose son went missing in a Central American jungle, tells Viceroy:

Well, there are many things governmental bodies just can’t do. Legalities, politics, sensitivities, protocols, funding—as you now are experiencing—and other impediments. Sometimes life’s challenges require different avenues. Wrongs can be righted if there’s a clear path forward. What I’m trying to say is you three would become my stealth investigative agency serving on a variety of fronts. There are fires burning both home and abroad, both personal and public, that could benefit from three elite firefighters, so to speak. And don’t make the mistake of thinking I’m simply exploring an idea or placating a wild fantasy in my old age.

The senator explains further that his son, who had a religious bent, was on a mission trip to Guatemala a decade ago when he disappeared. Though the senator hired others before Viceroy to find his son, no one had. The last person retained to find the young man also disappeared. But the senator received a tantalizing clue in this man’s satchel, which was hung from the gate of the senator’s estate one night about a month ago, and renewed Jürgen’s hope his son was still alive.

From there, the tension and mystery intensify rapidly, as other characters are introduced including the strange “The Lisp,” who is apparently trying to rescue the kidnapped scientist in the jungle. He understands he will be executed if he is found out.

Viceroy remains the dominant character as he agrees to undertake the search for Jürgen’s missing son. He is assisted by his two abled teammates in the hunt, and between them, they cross the country between Washington D.C., the underbelly of Milwaukee, and to ancient ruins in South America. The stakes are high—millions of lives might well be in danger if Viceroy and his team cannot discover the links between divergence clues, hints, and encounters.

The geography and the characters are intriguing and varied, which adds to the readability of the novel. The short chapters propel the story forward, and what seems at first to be a collection of unlinked adventures, eventually will be connected as the compelling mysteries are revealed. Fast paced, intricately plotted, well written, and well imagined, the Counsel of the Cunning is a winner for fans of international thrillers, mysteries, and police procedurals—and anyone who enjoys a page-turning novel of suspense.

Steven C. Harms debut novel, Give Place to Wrath, which introduced Viceroy, was named a Finalist of the 2018 American Fiction Awards, and a 2018 Killer Nashville Silver Falchion Award finalist. Harms, a native of Wisconsin, is a former professional sports business and media executive with a career spanning over thirty years across the NBA, NFL, and MLB.

About the reviewer: Claire Hamner Matturro has been a newspaper reporter in Alabama, a lawyer in Florida, and has taught at Florida State University College of Law and University of Oregon School of Law. An author of seven prior mysteries and legal thrillers, she and her husband live on the Gulf Coast of Florida. Her newest book, Wayward Girls (Red Adept Publishing Aug. 2021), is with co-author Penny Koepsel. Claire remains active in writers’ and environmental groups and is an associate editor at Southern Literary Review. Visit her at www.clairematturro.com

← Great giveaway
A review of Take Care by Eunice Andrada →