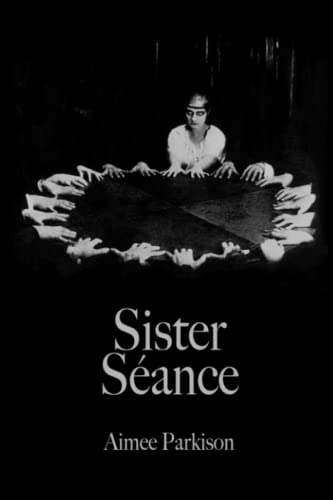 In her new historical horror fiction novel, Aimee Parkison constructs a post-Civil War era ghost story that examines the way pain and evil lingers in the physical and spiritual realm. Sister Séance follows a motley crew of individuals in Concord, Massachusetts in 1865 who have all gathered on Halloween night to partake in a “dumb supper,” a meal where the food is eaten in complete silence in hopes of drawing a spirit to the banquet. Following the gathering, some odd events begin to occur in the boarding house and to the people who attended the event, as more and more memories and figures from the past begin to reemerge and make the partygoers question if all of it is chicanery or proof of the supernatural.

Parkison begins the novel by introducing a large cast of characters, alternating chapters between perspectives. This cast includes four orphaned sisters residing in the boarding house in hopes of marriage opportunities, one of whom is a photographer and abolitionist hiding that she is pregnant from a former slave; the owner of the boarding house who, along with her brother, are affected by their ties to their southern plantation background even into their twilight years; and a cabal of war veterans and freed men and women, most notably a pair of twin sisters who claim to be spiritualists who can speak to those beyond the veil.

Before any of the supernatural elements of the novel begin, Parkison presents an incredibly diverse cast and plenty of intrigue. The cast are all harboring secrets, and even without the possibilities of ghosts appearing, you can expect things to go horribly wrong when secret affairs and secret children are revealed. It’s also in this first part that the reader begins to realize things aren’t as they appear. Some characters are viewed differently by others, and some seem to be letting on more than they are willing to admit. However, it’s after the dumb supper that Sister Séance goes into its real horror story.

Sister Séance examines characters who are all reaching out for the spiritual to make up for the horrors of the real world they have all experienced. Many of the characters are victims of slavery and racial-based violence. Several characters are noted to have physical scars or amputations due to field surgery or other acts of violence, and throughout the story, some characters inflict violence on themselves in fits of rage and hysteria. Each of the guests are carrying some kind of pain due to the environment they are in, whether it is due to their station in society, their race, their gender, etc., and their attempts to communicate with spirits read like some of them are attempting to find some answer for what their pain means after they pass away.

Parkison’s novel is quite chilling even with its slow buildup. The story’s pace means every chapter ends with either some new revelation or some progression towards something worse, and the rotating perspectives means creates dramatic irony that pays off with each new chapter. This allows the story to earn its more fantastic moments, as the realistic, recognizable horror permits for it’s absolutely wild climax.

Sister Séance is a ritual gathering of all the ways 19th century America broke down and changed people. It’s tale is full of rising tension and a variety of fascinating characters. It’s a novel where each chapter requires an exhalation at the end, and where you’re left waiting for permission to exhale as new revelations come to light.

About the reviewer: Alex Carrigan (@carriganak) is an editor, writer, and critic from Virginia. He has had fiction, poetry, and literary reviews published in Quail Bell Magazine, Lambda Literary Review, Empty Mirror, Gertrude Press, Quarterly West, Whale Road Review, ‘Stories About Penises’ (Guts Publishing, 2019), ‘Closet Cases: Queers on What We Wear’ (Et Alia Press, 2020), ‘ImageOutWrite Vol. 9,’ and ‘Last Day, First Day Vol. 2.’ He is also the co-editor of ‘Please Welcome to the Stage…: A Drag Literary Anthology’ with House of Lobsters Literary.